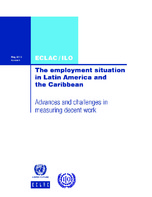 At 6.4%, the unemployment rate for the Latin American and Caribbean region overall was the lowest for the past few decades, down from 6.7% in 2011. This is significant, in view of the difficult employment situation prevailing in other world regions.
Labour market indicators improved despite modest growth of just 3.0% in the region’s economy. Even with sharply rising labour market participation, the number of urban unemployed fell by around 400,000, on the back of relatively strong job creation.
Nevertheless, around 15 million are still jobless in the region. Other highlights of 2012 labour market performance were that the gender gaps in labour market participation, unemployment and employment narrowed, albeit slightly; formal employment increased; the hourly underemployment rate declined; and average wages rose.
This rendering was obviously not homogenous across the region. Labour market indicators worsened again in the Caribbean countries, for example, reflecting the sluggish performance of their economies.
The sustainability of recent labour market progress is also a cause for concern.
Most of the new jobs in the region were created as part of a self-perpetuating cycle in which new jobs and higher real wages (and greater access to credit) have boosted household purchasing power and so pushed up domestic demand.
Much of this demand is for non-tradable goods and services (and imports), which has stimulated expansion of the tertiary sector and hence its demand for labour, and many of the new jobs have therefore arisen in these sectors of the economy.
This dynamic certainly has positive implications in terms of labour and distribution, but the concern is whether it is sustainable in a context of still relatively low investment (even after some recent gains) which is, moreover, not structured in a manner conducive to diversifying production. Doubt hangs over the future growth of production capacity in the region, given the enormous challenges facing the region in terms of innovation, education quality, infrastructure and productivity.
As vigorous job creation has driven progress in reducing unemployment, attention has turned once again to the characteristics of that employment. Awareness exists in the region that economic growth is essential, but not in itself sufficient to generate more and better jobs.
For some time, ILO has been drawing attention to the fact that it is not enough to create any sort of employment. The concept of decent work, as proposed by ILO, emphasized the need for quality jobs which enshrine respect for fundamental rights at work. The United Nations General Assembly endorsed this notion and incorporated it into the targets set in the framework of the Millennium Development Goals.
This eighth issue of the ECLAC/ILO publication “The employment situation in Latin America and the Caribbean” examines how the concept of decent work has evolved in the region, progress in measuring it and the challenges involved in building a system of decent work indicators, 14 years after the concept was first proposed.
Although the concept of decent work has been accompanied since the outset by the challenge of measurement, its first objective was to generate a discussion on the best achievable labour practices in each country. Accordingly, rather than defining a universal threshold of what could be considered decent work —regarding which developed countries might have almost reached the target before starting, while poor countries could be left hopelessly behind— ILO called upon the
countries to define their own criteria and measurements for promoting decent work policies.
As a result, there is no shared set of variables for measuring decent work applicable to all countries. The suggestion is, instead, that countries move forward with measuring decent work on the basis of their own priorities, using the information they have available now and in the future. However, this strategy of progressing according to the data available in each country tends to complicate statistical comparison between them. So, once the countries have developed their respective
systems of decent work indicators, it will be also be important to work towards harmonizing them. ECLAC and ILO are available to provide technical support to this end.
With respect to 2013, there is cautious optimism regarding the performance of the region’s labour markets.
If projections of a slight uptick —to 3.5%— in the region’s economic growth in 2013 are borne out, labour indicators should continue to gradually improve. This will bring new increases in real wages and a slight drop of up to 0.2 percentage points in the region’s unemployment rate, reflecting a fresh rise in the regional employment rate and slower growth in labour market participation.