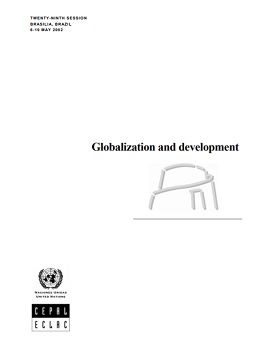 Introduction The process that has come to be known as globalization .i.e., the progressively greater influence being exerted by worldwide economic, social and cultural processes over national or regional ones— is clearly leaving its mark on the world of today. This is not a new process. Its historical roots run deep. Yet the dramatic changes in terms of space and time being brought about by the communications and information revolution represent a qualitative break with the past. In the light of these changes, the countries of the region have requested the secretariat to focus the deliberations of the twenty-ninth session of ECLAC on the issue of globalization and development. Globalization clearly opens up opportunities for development. We are all aware -and rightfully so- that national strategies should be designed to take advantage of the potential and meet the requirements associated with greater integration into the world economy. This process also, however, entails risks: risk generated by new sources of instability in trade flows and, especially, finance; the risk that countries unprepared for the formidable demands of competitiveness in today's world may be excluded from the process; and the risk of an exacerbation of the structural heterogeneity existing among social sectors and regions within countries whose linkages with the world economy are segmented and marginal in nature. Many of these risks are associated with two disturbing aspects of the globalization process. The first is the bias in the current form of market globalization created by the fact that the mobility of capital and the mobility of goods and services exist alongside severe restrictions on the mobility of labour. This is reflected in the asymmetric, incomplete nature of the international agenda that accompanies the globalization process. This agenda does not, for example, includelabour mobility. Nor does it include mechanisms for ensuring the global coherence of the central economies' macroeconomic policies, international standards for the appropriate taxation of capital, or agreements regarding the mobilization of resources to relieve the distributional tensions generated by globalization between and within countries. These shortcomings are the reflection of an even more disturbing problem: the absence of a suitable form of governance in the contemporary world, not only in economic terms (as has become particularly evident in the financial sector) but in many other areas as well. This lack of governance can be attributed, in its turn, to the sharp divergence between global problems and political processes that continue to be pursued within national and, increasingly, local frameworks. An important dimension of the globalization process -but certainly not one of the main focuses of attention in discussions on the subject- is the gradual spread of ideas and values with regard to civil and political rights, on the one hand, and economic, social and cultural rights, on the other. These ideas and values are gradually laying the foundations for the concept of global citizenship. No one entity embodies this aspect of the globalization process more fully than the United Nations. Under its founding Charter, ever since its inception the United Nations has reaffirmed global ideas and values regarding these rights. These ideas and values have subsequently been ratified by the Governments at a series of world summits. The first part of this study analyses globalization from an integral standpoint. As part of an exploration of the multidimensional nature of globalization, chapter 1 places the current phase of this process within the historical context of the world economy's progressive internationalization and explores its social, political and cultural components. Chapter 2 reviews the economic facets of the globalization process, including trade and investment, finance and macroeconomic regimes, and international labour mobility. Trends in income inequality and the fundamental asymmetries of the global order are examined in chapter 3. The fourth and final chapter of part one contains a proposal for a positive agenda for Latin America and the Caribbean in the global era. Based on a number of essential principles -such as shared objectives; global institutions that respect diversity; the complementarity of global, regional and national institutions; and equitable participation in accordance with suitable rules of governance- it outlines the steps to be taken at the national, regional and global levels to achieve three priority objectives of the new international order: the provision of global public goods, the correction of international asymmetries and the pursuit of a rights-based social agenda. The second part of the study focuses on specific issues: external vulnerability and macroeconomic policy (chapter 5), the integration of Latin America and the Caribbean in global trade and production circuits (chapter 6), strengthening innovation systems and technological development (chapter 7), international migration and globalization (chapter 8), globalization and environmental sustainability (chapter 9), globalization and social development (chapter 10) and the effects of globalization on the Caribbean economies (chapter 11). Following a brief diagnosis of the main problems in each of these areas, recommendations are made in these chapters concerning a series of measures that can be taken at the national, regional and international levels in order to implement the proposals put forward in chapter 4.