Home » Publications » Capital Flows to Latin America and the Caribbean
Available in: English

Capital Flows to Latin America and the Caribbean 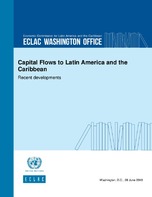 This document, prepared by the Economic Commission for Latin America and the Caribbean (ECLAC) Washington Office, presents and analyzes the most recent developments (first quarter of 2018) concerning capital flows to Latin America and the Caribbean.
The main highlights are:
-In January 2018, issuers from Latin America and the Caribbean (LAC) placed their highest ever monthly volume of debt in international markets. First quarter debt issuance in international markets also broke a record.
-From January to May 2018, total LAC international debt issuance amounted to US$ 67 billion, 6% higher than in the same period last year.
-On the sovereign side, nine countries tapped international bond markets this year so far, with Argentina topping the list with 35% of the total sovereign issuance from January to May.
-Despite a strong cross-border market performance in the beginning of the year, bond activity in the first five months of 2018 was affected by U.S. interest rate hikes, withdrawal of dollar liquidity, dollar strengthening, and instability in stock markets. The appreciation of the U.S. dollar in April and May, in particular, increased the pressure on LAC assets.
-An atmosphere of volatility clouded the market, and combined with increases in U.S. interest rates in March and June, contributed to a 7% decline in debut issuances from the region in the January-May 2018 period compared with the same period in 2017.
-There were no international bond issuances with a green focus in the first five months of the year, but there were green and social debt instruments issued in local currency markets.