Foreign Direct Investment in Latin America and the Caribbean 2007 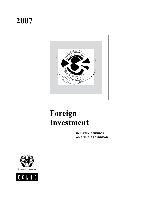 Latin America and the Caribbean received record levels of foreign direct investment (FDI) in 2007, with inflows surpassing the US$ 100 billion mark for the first time ever. This development is all the more significant because the previous record was set in 1999 in the context of one-off privatizations. The upsurge in investment was fuelled mainly by market-seeking transnational corporations (TNCs) intent on taking advantage of growth in local demand for goods and services and by natural-resource-seeking companies against a backdrop of buoyant global demand. Meanwhile, despite lower levels of outward FDI from the regions' transnationals (trans-Latins), new companies in different industries are investing outside their home countries, while some of the traditional trans-Latins are taking their foreign investments to new levels.This report provides an overview of FDI flows to and from the region in 2007 and of the recent activities of transnationals in the region and of trans-Latins outside their home countries (chapter I). It further explores three topics: investment in hardware for information and communication technologies (ICTs) (chapter II); investment in telecommunications services (chapter III); and Canadian investment in Latin America and the Caribbean (chapter IV). Chapters II and III describe the evolution of ICT hardware and telecommunications services industries in the context of the technological changes that have generated convergence among ICT services and have had impacts both on the industrial organization of manufacturing and on the market structure and incentives for telecommunications operators. These chapters provide insight into the challenges involved in maximizing the benefits of FDI in industries subject to rapid technological change, where the regional strategies of transnational corporations are shaped by a combination of global strategies and trends in local policy and regulation. The Canadian experience is relevant both because of the country's increasing role as an investor in then region in a wide range of sectors —from mining to autoparts to finance— and because it represents a parallel to the Latin American and Caribbean region's own corporate evolution owing to the existence of a number of seldom-recognized similarities (notably, a strong natural-resource base and a heavy reliance on the United States economy). Within this context, the slowdown of the United States economy presents an opportunity for officials and investors from Canada and from Latin America and the Caribbean to reevaluate their relationship. Note: In reference to the 2007 edition of Foreign Investment in Latin America, ECLAC would like to inform its readers that the Central Bank of the Bahamas published its final estimate of FDI received by that country in 2007 on 5 May 2008. The final estimate amounts to US$ 692.7 million, which is similar to the amount received in 2007 (US$ 705.8 million). The estimate published by ECLAC in its ECLAC report, which had a closing date of 30 April 2008, was based on an extrapolation of data for the first three quarters of the year.